OK, here is the surprise...

I've been falling more and more into the habit of reading LovelyBike, 2Whls3Spds, and, of course, Sheldon's sites amongst many others.  After finding and re-habbing the Twenties, I realized that they would not be bikes that I would ride for any kind of distance or back roads touring.  They are beach bikes and tootling around bikes.  I needed a roadster!  My wife had her Raleigh Sport from 1980, I needed a mate to it.

The Raleigh Tourist that was on eBay all last week is now in my garage!!!

After the bidding ended, I was the high bidder but didn't clear the reserve price set by the seller.  I immediately contacted them, informed him/her that I was the high bidder, lived about an hour away and could stop by and take a look.  Dick (the seller) had a reserve set at $550 for the bike.  We negotiated a lower price (still much more than I usually pay for a bike, but this one was truly worth it, IMHO), right around $400.  This was all on Tuesday.  I had to wait all week to drive down to Gig Harbor.  THAT was the hardest part!!

I got up at 5:30AM this morning, filled the tank on our minivan, mounted a bike rack and took off.  It was a drizzly, wet morning, but there was very light traffic heading south on I-5.  It had been forever since I drove across the Tacoma Narrows bridge.  The mental images I have of it are only the classic movie of Galloping Gertie breaking apart in the wind.  You can't help but think of this as you drive across it now.  It is a spectacular crossing and I'd love to try it on a bike someday.

After getting a little lost, I finally made it to Dick's house.  He was an elderly gentleman in his upper 70's (I'm guessing).  We chatted for a bit.  He was a bike collector, and at one time he had over 40 bicycles, many of them from prior to the turn of the century!  Penny Farthings and the like!!  This was his last bike.  A 1980 Raleigh Tourist... in STUNNING condition. 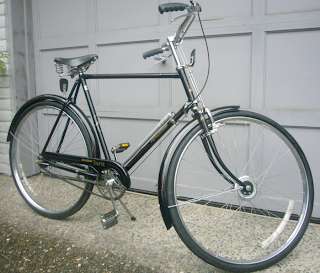 As I walked up to the bike, I could tell it been well taken care of, possibly not even ridden.  Every decal was intact, no paint scratches on the frame - none.  The only detectable flaw I could find was a small dent in the front fender - looks like a BB struck it, but the paint is still intact in the impression.  The Brooks saddle is a leather B-66, with the modern steel rivets.  The saddle is in great condition, the black color is slightly worn through in a few spots.  Nothing a fresh coat of Proofhide won't nourish.

It has the original Raleigh bell.  Bright and clean it rings, not a speck of rust.  The central medallion has a frosted metal look that is striking against the chrome of the bell.  Looks like a vintage coin... 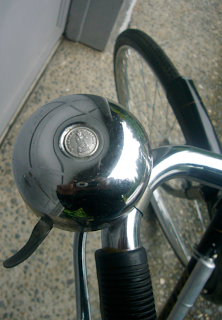 The thumb shifter validates the dating on this roadster.  It's a 1980 (see hub below). I'm not sure when Raleigh stopped shipping Tourist's to the US, but this must've been near the end.  Dick was the original owner.  He purchased her in Seattle, near Green Lake. 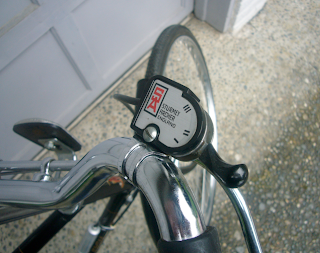 One interesting thing is the front wheel.  I believe it is a replacement.  It does NOT have the Raleigh-red hub nuts.  It also has a dyno-hub!  Not hooked up to any wiring or lighting, but there it is.  I wonder if at some point there was work being done and the wheels were accidentally interchanged with a Superbe.  Dick told me he had an extra wheel in the attic.  It may be the stock wheel.  He was going to check on it and, if it is, I will pick it up sometime in the future. The Westwood rims are in stellar condition, no dents and arrow true.  The tyres are original Raleigh Roadsters 40-635 28 x 1.5 with plenty of tread left.  I so admire Velouria and the "co-inhabitant's" bikes with the Schwalbe cream colored tyres on LovelyBike, I wanted to convert these.  I probably still will just to preserve these stock tyres in their original condition. 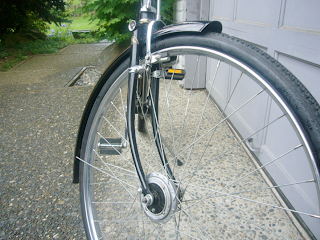 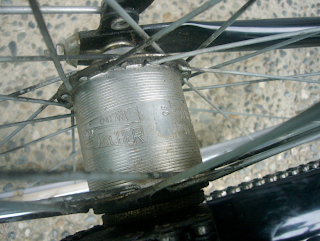 Here is the last picture for now... the chain guard is in great shape. The overall color scheme is the black with red and gold pin striping and decal sets.  Even has original aluminum air pump. 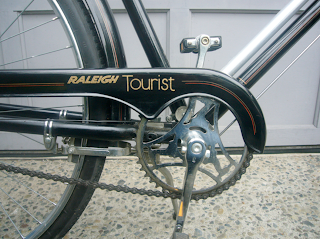 So... that's it for now.  Some questions I have... did this originally have a Pletscher rack on it?  Could the dyno-hub be stock?  The rod brakes appear to work fine, but the front need adjusting and possibly new pads.  Are rod brake pads "special" or can you use any set of brake pads with a central bolt fitting, something like a Koolstop Continental?

Thanks for getting me hooked everyone!